Can anyone out there help me understand what Linearizability is? I need an explanation that is simple and easy to understand. I'm reading The Art of Multiprocessor Programming by Maruice Herilihy and Nir Shavit and am trying to understand Chapter 3 about Concurrent Objects.

I understand that a method is Linearizable if it has a point where it seems to "take effect" instantaneously from the point of view of the other threads. That makes sense, but it is also said that Linearizability is actually a property of the execution history. What does it mean for an execution history to be Linearizable, why do I care, and how does it relate to a method or object being Linearizable? 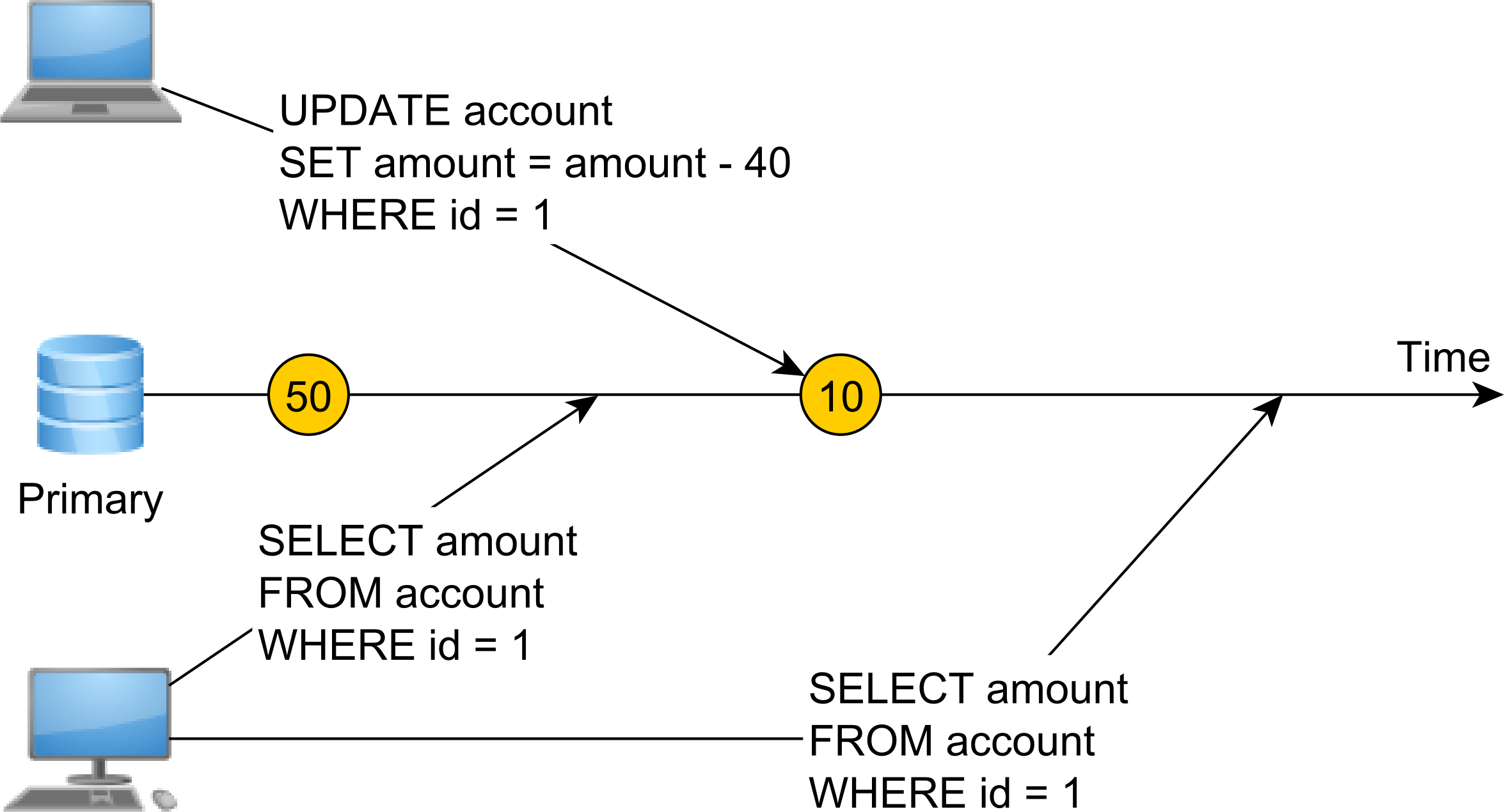 Linearizability means that modifications happen instantaneously, and once a registry value is written, any subsequent read operation will find the very same value as long as the registry will not undergo any modification.

What happens if you don't have Linearizability? 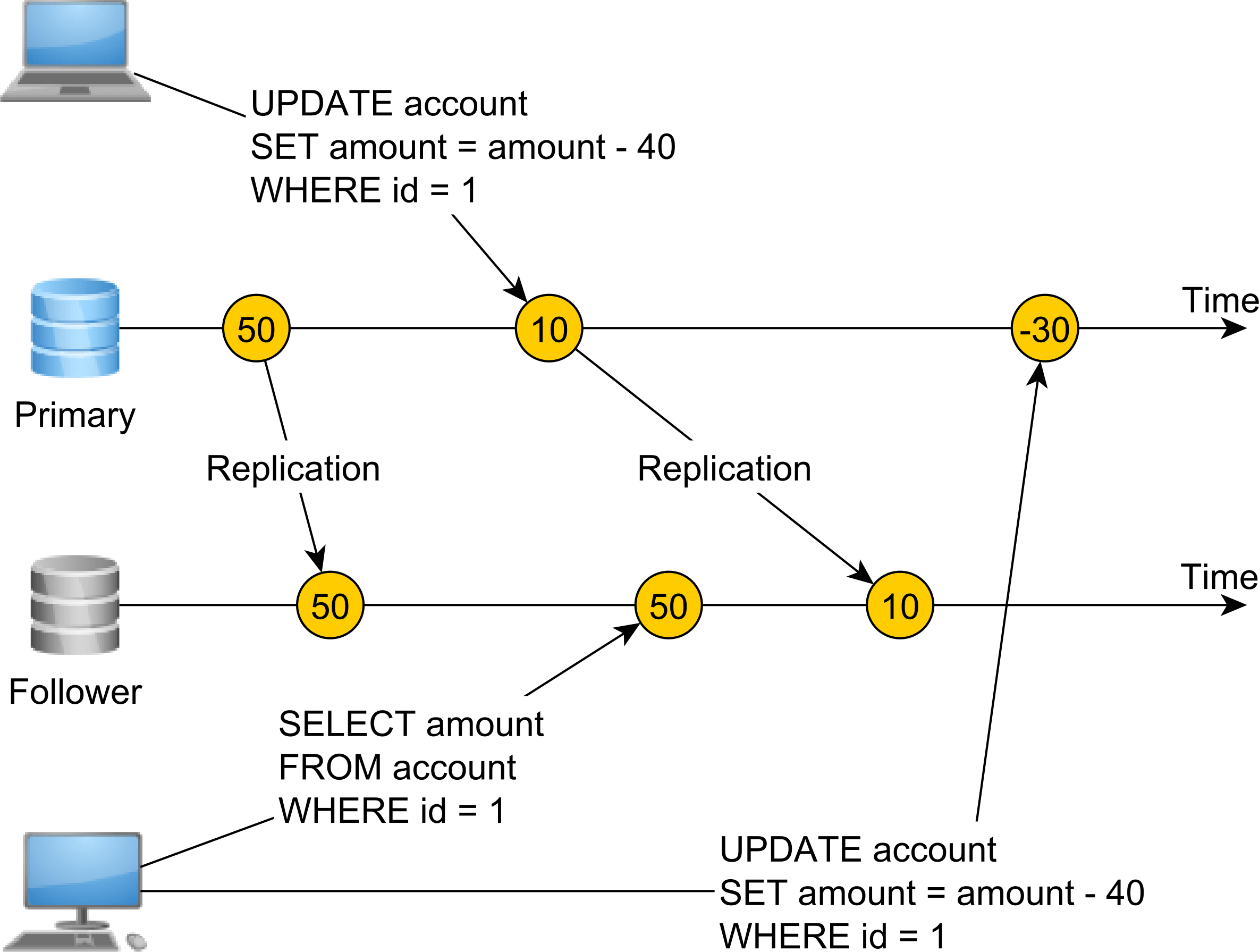 This time, we don’t have a single registry or a single source of truth. Our system uses asynchronous database replication, and we have a Primary node that takes both reads and writes and a Follower node used for read operations only.

Because replication happens asynchronously, there’s a lag between the Primary node row modification and the time when the Follower applies the same change.

One database connection changes the account balance from 50 to 10 and commits the transaction. Right after, a second transaction reads from the Follower node, but since replication did not apply the balance modification, the value of 50 is read.

Therefore, this system is not linearizable since changes don’t appear to happen instantaneously. In order to make this system linearizable, we need to use synchronous replication, and the Primary node UPDATE operation will not complete until the Follower node also applies the same modification.

Well, I think I can answer this question concisely.

When we are going to tell whether a concurrent object is correct, we always try to find a way to extend the partial order to a total order.

we can recognize whether a sequential object is correct much more easily.

First, Let's put the concurrent object aside. We will discuss it later. Now let's consider a sequential history H_S, a sequential history is a sequence of events(i.e Invokes and Responses) of which each Invoke is followed instantaneously by its corresponding Response.(Ok, "instantaneously" could be confused, consider the execution of a single-threaded program, of course there's an interval between each Invoke and its Response, but the methods are executed one by one. So "instantaneously" means that no other Invoke/Response can stick into a pair of Invoke_i~Response_i)

It will be very easy to reason about the correctness of the history H_S, because there isn't any concurrency, what we need to do is to check whether the execution works as well as what we expect(meet the conditions of the sequential specification). In other words, is a legal sequential history.

Ok, the reality is we are working with a concurrent program. For example, we run two threads A and B in our program. Every time we run the program, we will get a history H_C(History_Concurrent) of execution. We need to consider a method call as Ii~Ri as above in H_S. Of course, there must be a lot of overlaps between method calls called by thread A and thread B. But each event(i.e Invokes and Responses) has it's real-time order. So the Invokes and Response of all the methods called by A and B can be mapped to a sequential order, the order may look like:

The order seems to be confused, it's just the sort of the events of each method calls:

And we got the H_C. So how could we check whether the execution of H_C is correct? We can reorder the H_C to a H_RO following the rule:

RULE: If one method call m1 precedes another m2, then the m1 must precedes m2 in the reordered sequence. (It means that if Ri is in front of Ij in the H_C, you must guarantee that Ri is still in front of Ij in the reordered sequence, i and j doesn't have their orders , we can also use a, b, c...) We say that H_C is equivalent to H_RO(history_reorder) under such rule.

The H_RO will have 2 properties:

Reorder the H_C without violating the rule above, we can get some sequential histories(which are equivalent to H_C), For example:

However, we cannot get a H_S5:

The answer is straightforward, if at least one of the sequential histories is correct(a legal sequential history meet the conditions of the sequential specification), then the history H_C is linearizable, we call the legal H_S the linearization of the H_C. And H_C is a correct execution. In other words, it is a legal execution that we expected. If you have experience on concurrent programming, you must have written such program which sometimes looks quite well but sometimes be wholly wrong.

The basic idea behind linearizability is that every concurrent history is equivalent, in the following sense, to some sequential history. [The Art of Multiprocessor Programming 3.6.1 : Linearizability] ("following sense" is the reorder rule I have talked about above)

Ok, the reference may be a little confused. It means that, if every concurrent history has a linearization(legal sequential history equivalent to it), the concurrent program meets the conditions of linearizability.

So it is obvious that linearizability is a safety(correctness) property.

The usual way to show that a concurrent object implementation is linearizable is to identify for each method a linearization point where the method takes effect. [The Art of Multiprocessor Programming 3.5.1 : Linearization Points]

It's quite easy to find the error. We can translate i++ into:

So two threads can execute one "i++;" concurrently and the result of i appears to be increased only once. We could get such a H_C:

Whatever you try to reorder the real-time order, you must not find a legel sequential history that equivalent to H_C.

We should rewrite the program:

OK, what is the linearization point of inc_counter()? The answer is the whole critial section. Because when a lot of threads repeatedly call the inc_counter(), the critical section will be executed atomically. And it can guarantee the correctness of the method. The Response of the method is the increamented value of global i. Consider the H_C like :

We have reorder the IB1~RB1 and IA1~RA1, because they're overlapped in the real time order, they can be reordered ambigously. In case of the H_C, we can reason that the critical section of the IB1~RB1 is entered first.

The example is too simple. Let's consider another one:

It's a lock-free stack algorithm full of bugs! but don't take care of the details. I just want to show the linearization point of push() and pop(). I have shown them in the comments. Consider many threads repeatedly call push() and pop(), they will be ordered at the CAS step. And other steps seem to be of no importance because whatever they concurrently executed, the final effect they will take on the stack(precisely top variable) is due to the order of the CAS step(linearization point). If we can make sure that the Linearization point really work, then the concurrent stack is correct. The picture of the H_C is too long, but we can confirm that there must be a legal sequential equivalent to H_C.

Then you can say your concurrent object is correct.

A single object is considered linearizable if

(a) each of its methods is atomic. Imagine them as java synchronized methods, but more below.

(b) there can be at most one pending operation from any given thread/processor.

(c) the operations must take effect before they return. It is not acceptable for the object to enqueue them to perform them lazily.

Now, (a) can be loosened a lot more. Linearizability requires that the the effect of that operation is atomic. So, an add operation in a lock-free linked list will have one point in its execution (a "linearization point") before which that element wasn't added, and after which the element is definitely in. This is better than obtaining locks, because locks can block indefinitely.

Now, when multiple threads call a linearizable object concurrently, the object behaves as if the methods are called in some linear sequence (because of the atomicity requirement); two overlapping calls could be made linear in some arbitrary order.

And because they are forced to have an effect sometime during the method invocation (stacks must push/pop, sets must add/delete etc.), the object can be reasoned about with well-known sequential specification methods (pre and post conditions etc).

While we are at it, the difference between linearizability and sequential consistency is that the latter does not require (c). For a sequentially consistent data store, a method does not have to have an effect right away. In other words, a method invocation is merely a request for action, but not the action itself. In a linearizable object, a method invocation is a call to action. A linearizable object is sequentially consistent, but not the other way around.

Maybe a confusion between Linearizability versus Serializability.

From this article (P. Bailis):

2
Is a method with no linearization points always not linearizable?