Determine whether the two classes are linearly separable (algorithmically in 2D)

There are two classes, let's call them X and O. A number of elements belonging to these classes are spread out in the xy-plane. Here is an example where the two classes are not linearly separable. It is not possible to draw a straight line that perfectly divides the Xs and the Os on each side of the line. 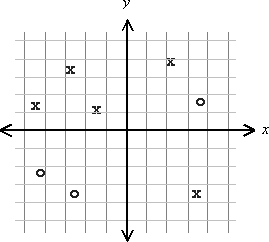 How to determine, in general, whether the two classes are linearly separable?. I am interested in an algorithm where no assumptions are made regarding the number of elements or their distribution. An algorithm of the lowest computational complexity is of course preferred.

If you found the convex hull for both the X points and the O points separately (i.e. you have two separate convex hulls at this stage) you would then just need to check whether any segments of the hulls intersected or whether either hull was enclosed by the other.

If the two hulls were found to be totally disjoint the two data-sets would be geometrically separable.

Since the hulls are convex by definition, any separator would be a straight line.

There are efficient algorithms that can be used both to find the convex hull (the qhull algorithm is based on an O(nlog(n)) quickhull approach I think), and to perform line-line intersection tests for a set of segments (sweepline at O(nlog(n))), so overall it seems that an efficient O(nlog(n)) algorithm should be possible.

This type of approach should also generalise to general k-way separation tests (where you have k groups of objects) by forming the convex hull and performing the intersection tests for each group.

It should also work in higher dimensions, although the intersection tests would start to become more challenging...

Computationally the most effective way to decide whether two sets of points are linearly separable is by applying linear programming. GLTK is perfect for that purpose and pretty much every highlevel language offers an interface for it - R, Python, Octave, Julia, etc.

Let's say you have a set of points A and B:

Then you have to minimize the 0 for the following conditions:

(The A below is a matrix, not the set of points from above)

"Minimizing 0" effectively means that you don't need to actually optimize an objective function because this is not necessary to find out if the sets are linearly separable.

) is defining the separating plane. 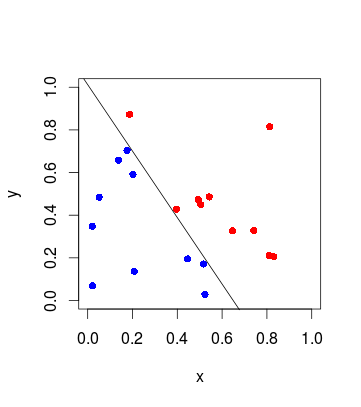 In case you are interested in a working example in R or the math details, then check this out.

Here is a naïve algorithm that I'm quite sure will work (and, if so, shows that the problem is not NP-complete, as another post claims), but I wouldn't be surprised if it can be done more efficiently: If a separating line exists, it will be possible to move and rotate it until it hits two of the X'es or one X and one O. Therefore, we can simply look at all the possible lines that intersect two X'es or one X and one O, and see if any of them are dividing lines. So, for each of the O(n^2) pairs, iterate over all the n-2 other elements to see if all the X'es are on one side and all the O's on the other. Total time complexity: O(n^3).

Linear perceptron is guaranteed to find such separation if one exists.

You can probably apply linear programming to this problem. I'm not sure of its computational complexity in formal terms, but the technique is successfully applied to very large problems covering a wide range of domains.

Computing a linear SVM then determining which side of the computed plane with optimal marginals each point lies on will tell you if the points are linearly separable.

This is overkill, but if you need a quick one off solution, there are many existing SVM libraries that will do this for you.

As mentioned by ElKamina, Linear Perceptron is guaranteed to find a solution if one exists. This approach is not efficient for large dimensions. Computationally the most effective way to decide whether two sets of points are linearly separable is by applying linear programming.

In general that problem is NP-hard but there are good approximate solutions like K-means clustering.

Well, both Perceptron and SVM (Support Vector Machines) can tell if two data sets are separable linearly, but SVM can find the Optimal Hiperplane of separability. Besides, it can work with n-dimensional vectors, not only points.

It is used in applications such as face recognition. I recomend to go deep into this topic.

Not the answer you're looking for? Browse other questions tagged algorithm math machine-learning classification or ask your own question.

4
How can I say if I can divide 2 groups of points with a line?
1
Algorithm for identifying non-ambiguous clusters?
-2
Given a feature vector, how to find whether my data points are linearly separable

189
Algorithm to find Largest prime factor of a number
1383
Determine Whether Two Date Ranges Overlap
117
Fast permutation -> number -> permutation mapping algorithms
1206
Easy interview question got harder: given numbers 1..100, find the missing number(s) given exactly k are missing
5
How can I compare computational complexities : O(k * M(n)) and O(log^6(n))?
970
How to find time complexity of an algorithm
781
How do I determine whether my calculation of pi is accurate?
1
Are Gaussian clusters linearly separable?