I downloaded pip and ran python setup.py install and everything worked just fine. The very next step in the tutorial is to run pip install <lib you want> but before it even tries to find anything online I get an error "bash: pip: command not found".

This is on Mac OS X, which I'm new to, so I'm assuming there's some kind of path setting that was not set correctly when I ran setup.py. How can I investigate further? What do I need to check to get a better idea of the exact cause of the problem?

EDIT: I also tried installing Python 2.7 for Mac in the hopes that the friendly install process would do any housekeeping like editing PATH and whatever else needs to happen for everything to work according to the tutorials, but this didn't work. After installing, running 'python' still ran Python 2.6 and PATH was not updated.

This installs pip using the default python package installer system and saves you the hassle of manual set-up all at the same time.

This will allow you to then run the pip command for python package installation as it will be installed with the system python. I also recommend once you have pip using the virtualenv package and pattern. :)

For current Debian/Ubuntu, use

(I know the above part of my answer is redundant with klobucar's, but I can't add comments yet), so here's an answer with a solution to sudo: easy_install: command not found on Debian/Ubuntu: sudo apt-get install python-setuptools

Also, for python3, use easy_install3 and python3-setuptools.

For Python 3, use apt-get install python3-pip.

First of all: try pip3 instead of pip. Example:

pip3 should be installed automatically together with Python3.x. The documentation hasn't been updated, so simply replace pip by pip3 in the instructions, when installing Flask for example.

Now, if this doesn't work, you might have to install pip separately.

Update: A more reliable modern way to access the right pip install for the right python install is to use the syntax python -m pip.

pip would install itself into the bin of your python installation location. It also should create a symlink to some more common location like /usr/local/bin/pip

You can either edit your ~/.profile and update your PATH to include /Library/Frameworks/Python.framework/Versions/2.6/bin, or you could create a symlink to it in a place that you know is in your path.

If you do: echo $PATH, you should see the paths currently being searched. If /usr/local/bin is in your PATH, you can do:

I would opt for adding the python bin to your $PATH variable.

I have to admit to being absolutely new to python, which I only need for one thing: awscli. I encountered this problem having downloaded python 3.x.x - pip: command not found

Whilst following the instructions for downloading the AWS cli I changed

which ran the correct version.

I've made an alias on my machine to run python3 whilst typing python, which would normally run the system version 2.7. I'm not sure this is a good idea now. I think I'll just type in the commands as they intended them to be

Check out How to Install Pip article article for more information.

After you done installing, run this command to check if pip is installed.
pip --version 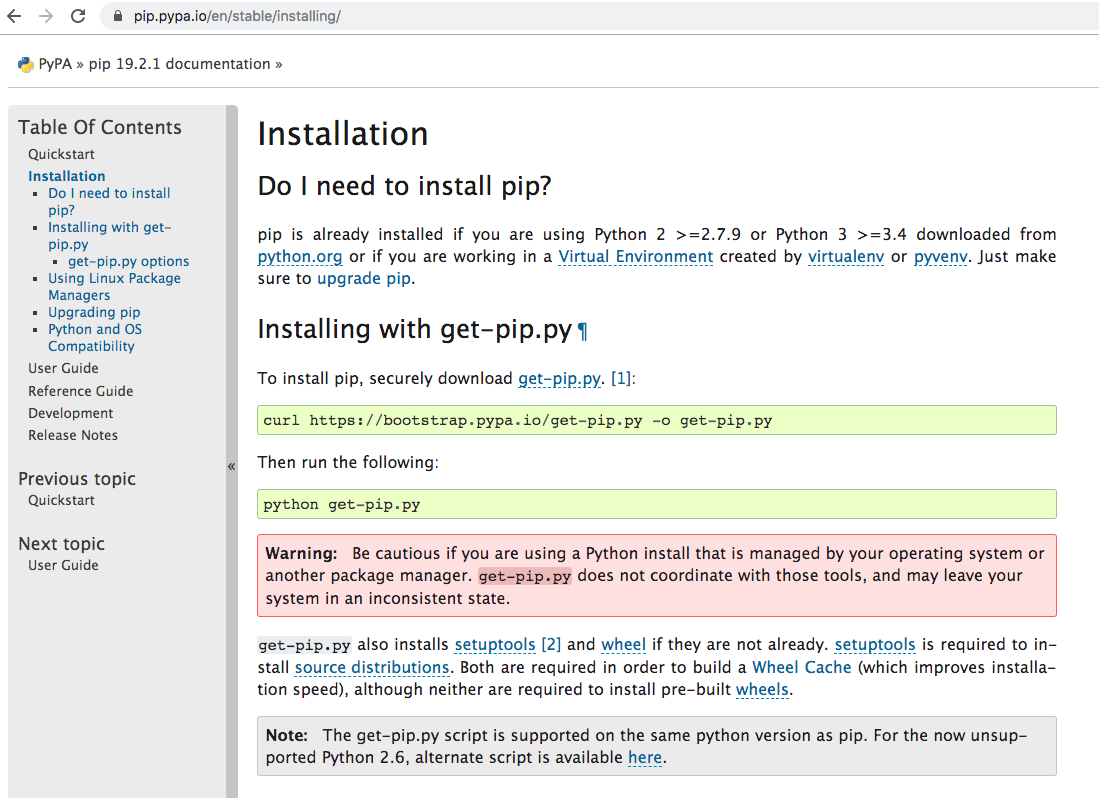 Then go to terminal and enter following command:-

For Python install packages check this

Requirements for Installing Packages This section describes the steps to follow before installing other Python packages.

Install pip, setuptools, and wheel If you have Python 2 >=2.7.9 or Python 3 >=3.4 installed from python.org, you will already have pip and setuptools, but will need to upgrade to the latest version:

On Linux or OS X:

Run python get-pip.py. 2 This will install or upgrade pip. Additionally, it will install setuptools and wheel if they’re not installed already.

The answer is to use pip3:

Installing using apt-get installs a system wide pip, not just a local one for your user. Try this command to get pip running on your system ...

Then pip will be installed without any issues and you will be able to use "sudo pip...".

Most of the methods to install PIP are deprecated. Here is the latest (2019) solution. Please download get-pip script

Add following alias in $HOME/.bash_aliases in some cases file may be hidden.

to get Home path

you will get your home path.

It might be the root permission. I tried exit root login, use

that works for me

insert the Homebrew directory at the top of your PATH environment variable. You can do this by adding the following line at the bottom of your ~/.profile file

If you are running Python 3.5, run the following terminal command:

Any other pip commands in terminal would be similar:

Solved this by upgrading python 3 brew upgrade python: Now i can just do:

It solved my problem by using

Based on this stackoverflow answer and some of the answers on this thread, I have created an alias in the rc file: alias pip="python3 -m pip"

There seem to be many different answers to this question but this seems to be the best-practice approach.

assuming you have internet see: https://pip.pypa.io/en/stable/installing/

To overcome the issue "bash: pip: command not found" in Mac

But, whenever I would require to do pip install , I wanted to install the package under python3.7, so I have set an alias (alias pip=pip3)in .bash_profile

so now, whenever I do pip install , it gets installed under python3.7

I was was not able to install this zmq package in my docker image because of the same issue i was getting. So tried this as another way to install and it worked fine for me.

CentOS 7 users can just use:

Also recommend using virtualenv if you're using pip. It can be added in the same way:

(Context: My OS is Amazon linux using AWS. It seems similar to RedHat but it's stripped down a bit, it seems.)

Exit the shell, then open a new shell. The pip command now works.

That's what solved the problem at this location.

You might want to know as well: The pip commands to install software then needed to be written like this example (jupyter for example) to work correctly on my system:

Specifically, note the lack of sudo, and the presence of --user

Would be real nice if pip docs had said anything about all this, but that would take typing in more characters I guess.

Not sure why this wasnt mentioned before, but the only thing that worked for me (on my NVIDIA Xavier) was:

What I did to overcome this was sudo apt install python-pip.

It turned out my virtual machine did not have pip installed yet. It's conceivable that other people could have this scenario too.

The updated command for installing pip3 is :

"After installing is running 'python' still ran Python 2.6 and PATH was not updated."

1- Install latest version of Python 2- Change your PATH manually as python38 and compare them. 3- Try to reinstall.

I solved this problem as replacing PATH manually with the latest version of Python. As for Windows: ;C:\python38\Scripts

Not the answer you're looking for? Browse other questions tagged python macos pip python-2.6 or ask your own question.

5675
How do I execute a program or call a system command?
2494
How to upgrade all Python packages with pip
2682
How can I install pip on Windows?
919
pip install mysql-python fails with EnvironmentError: mysql_config not found
1698
Installing specific package version with pip
1487
How can I install packages using pip according to the requirements.txt file from a local directory?
1195
pg_config executable not found
1672
How do I install pip on macOS or OS X?
1231
How to install Java 8 on Mac
576
pip install fails with "connection error: [SSL: CERTIFICATE_VERIFY_FAILED] certificate verify failed (_ssl.c:598)"