I'm looking for implementation of log() and exp() functions provided in C library <math.h>. I'm working with 8 bit microcontrollers (OKI 411 and 431). I need to calculate Mean Kinetic Temperature. The requirement is that we should be able to calculate MKT as fast as possible and with as little code memory as possible. The compiler comes with log() and exp() functions in <math.h>. But calling either function and linking with the library causes the code size to increase by 5 Kilobytes, which will not fit in one of the micro we work with (OKI 411), because our code already consumed ~12K of available ~15K code memory.

The implementation I'm looking for should not use any other C library functions (like pow(), sqrt() etc). This is because all library functions are packed in one library and even if one function is called, the linker will bring whole 5K library to code memory.

The algorithm should be correct up to 3 decimal places.

Using Taylor series is not the simplest neither the fastest way of doing this. Most professional implementations are using approximating polynomials. I'll show you how to generate one in Maple (it is a computer algebra program), using the Remez algorithm.

For 3 digits of accuracy execute the following commands in Maple:

Its response is the following polynomial: 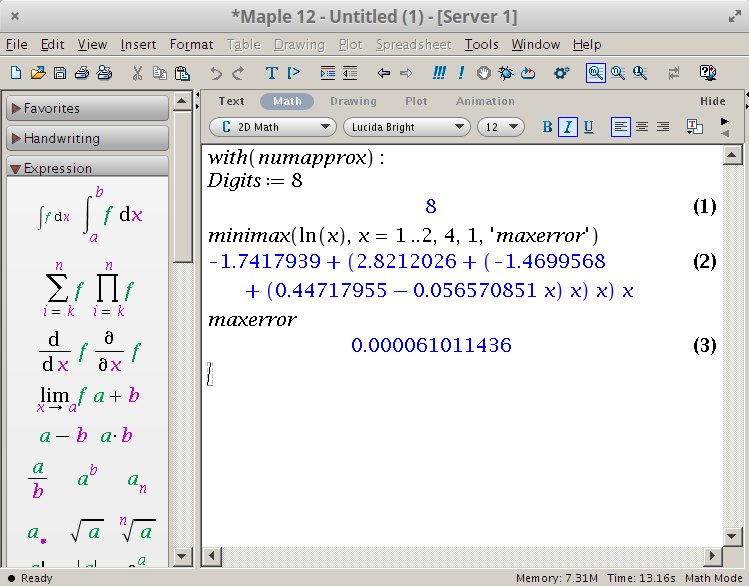 We generated a polynomial which approximates the ln(x), but only inside the [1..2] interval. Increasing the interval is not wise, because that would increase the maximal error even more. Instead of that, do the following decomposition:

So first find the highest power of 2, which is still smaller than the number (See: What is the fastest/most efficient way to find the highest set bit (msb) in an integer in C?). That number is actually the base-2 logarithm. Divide with that value, then the result gets into the 1..2 interval. At the end we will have to add n*ln(2) to get the final result.

An example implementation for numbers >= 1:

The Taylor series for e^x converges extremely quickly, and you can tune your implementation to the precision that you need. (http://en.wikipedia.org/wiki/Taylor_series)

The Taylor series for log is not as nice...

If you don't need floating-point math for anything else, you may compute an approximate fractional base-2 log pretty easily. Start by shifting your value left until it's 32768 or higher and store the number of times you did that in count. Then, repeat some number of times (depending upon your desired scale factor):

If the above loop is repeated 8 times, then the log base 2 of the number will be count/256. If ten times, count/1024. If eleven, count/2048. Effectively, this function works by computing the integer power-of-two logarithm of n**(2^reps), but with intermediate values scaled to avoid overflow.

Would basic table with interpolation between values approach work? If ranges of values are limited (which is likely for your case - I doubt temperature readings have huge range) and high precisions is not required it may work. Should be easy to test on normal machine.

Here is one of many topics on table representation of functions: Calculating vs. lookup tables for sine value performance?

Necromancing.
I had to implement logarithms on rational numbers.

This is how I did it:

which can be used for very-high precision.

Using Newton's method, the iteration simplifies to (implementation), which has cubic convergence to ln(x), which is way better than what the Taylor-Series offers.

This is not C, but C#, but I'm sure anybody capable to program in C will be able to deduce the C-Code from that.

You have therefore just implemented logN as well.

where epsilon (error) is the minimum precision.

Now as to speed, you're probably better of using the ln-cast-in-hardware, but as I said, I used this as a base to implement logarithms on a rational numbers class working with arbitrary precision.

Arbitrary precision might be more important than speed, under certain circumstances.

In addition to Crouching Kitten's answer which gave me inspiration, you can build a pseudo-recursive (at most 1 self-call) logarithm to avoid using polynomials. In pseudo code

This is pretty efficient and precise since on [1; 2) the taylor series converges A LOT faster, and we get such a number 1 <= a < 2 with the first call to ln if our input is positive but not in this range.

You can find 'b' as your unbiased exponent from the data held in the float x, and 'a' from the mantissa of the float x (a is exactly the same float as x, but now with exponent biased_0 rather than exponent biased_b). LN2 should be kept as a macro in hexadecimal floating point notation IMO. You can also use http://man7.org/linux/man-pages/man3/frexp.3.html for this.

for "memory-casting" double to unsigned long, rather than "value-casting", is very useful to know when dealing with floats memory-wise, as bitwise operators will cause warnings or errors depending on the compiler.

Possible computation of ln(x) and expo(x) in C without <math.h> :

Not the answer you're looking for? Browse other questions tagged c math microcontroller or ask your own question.

145
What is the fastest/most efficient way to find the highest set bit (msb) in an integer in C?
20
Calculating vs. lookup tables for sine value performance?
3
Issue with implementation of natural logarithm (ln) and exponentiation
2
How does numpy compute an exponential?
0
Python logarithm math strange result