What is the difference between square brackets and parentheses in a regex?

Here is a regular expression I created to use in JavaScript:

Here is another one suggested by my team member.

The rule is to validate a phone number:

These regexes are equivalent (for matching purposes):

The reason these regexes are similar is that a character class is a shorthand for an "or" (but only for single characters). In an alternation, you can also do something like (abc|def) which does not translate to a character class.

Your team's advice is almost right, except for the mistake that was made. Once you find out why, you will never forget it. Take a look at this mistake. 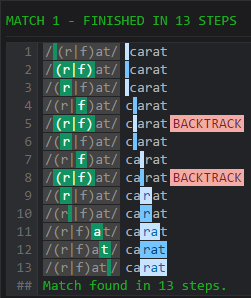 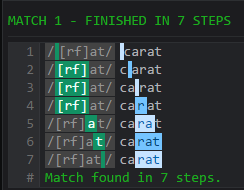 Look at what it does:

The optimal regex is /^[789]\d{9}$/, because /^(7|8|9)\d{9}$/ captures unnecessarily which imposes a performance decrease on most regex implementations (javascript happens to be one, considering the question uses keyword var in code, this probably is JavaScript). The use of php which runs on PCRE for preg matching will optimize away the lack of backtracking, however we're not in PHP either, so using classes [] instead of alternations | gives performance bonus as the match does not backtrack, and therefore both matches and fails faster than using your previous regular expression.

The first 2 examples act very differently if you are REPLACING them by something. If you match on this:

you would replace 7 or 8 or 9 by the empty string.

If you match on this

I just found this out the hard way.

3
Regular Expression what is the difference between (T|E|N)* and [TEN]*
1
Regex: Difference between square brackets [] and vertical bar |
-2
What different in the two Regular Express?
-2
Replacing special characters in Java String
-2
regular expression: the outcome is not as expected
0
Regex for "weeks from today"
0
Can classes be nested in regex
1
what regular expression [[:space:][:digit:]]+ stands for in r
52
Reference - What does this regex mean?
2
Regex Situation... More than one group with variable spaces
See more linked questions

616
What is the difference between re.search and re.match?
382
Converting user input string to regular expression
531
Regular expression to extract text between square brackets
737
Find and kill a process in one line using bash and regex
197
Validate phone number with JavaScript
135
Regex to replace everything except numbers and a decimal point
391
Greedy vs. Reluctant vs. Possessive Qualifiers
575
Regex Match all characters between two strings
127
Regular Expression to reformat a US phone number in Javascript