I want to generate a Program Dependence Graph (PDG) from C source code. I found papers that explain how do it, but all used the commercial CodeSurfer tool.

Are there any free tools or open source projects that can do this job?

Frama-C is an Open Source static analysis platform with a slicer for C programs based on the computation of a Program Dependence Graph.

Note that slicing actual programs written in a real programming language such as C involves many special cases and concepts that are skimmed over in scientific publications. Still, I am confident that you won't find anything simpler than Frama-C's PDG computation, first because it is the only Open Source one available (that I know of), and second because any other PDG computation that handled C programs would have to solve the same problems and introduce the same concepts.

Here is one example:

You can use the dot program to pretty-print one of them thus: dot -Tpdf graph.main.dot > graph.pdf

The result is below: 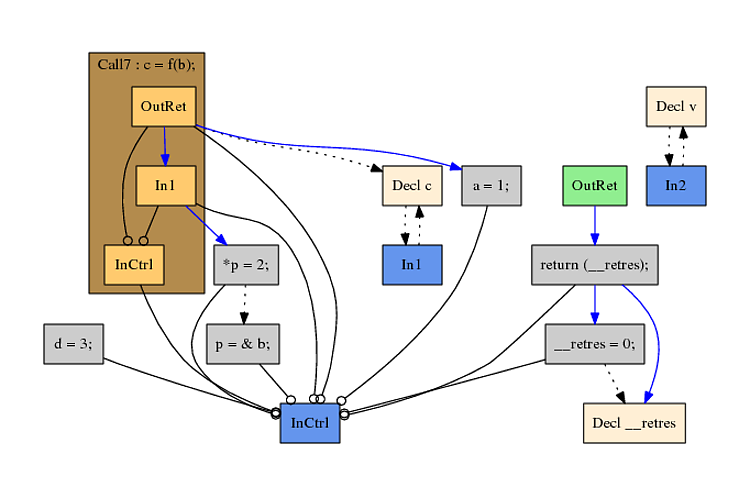 Note the edge from the node c = f(b); to the node *p = 2;. A PDG computation claiming to be useful for C programs must handle aliasing.

On the other hand, a slicer using this PDG to slice on the criterion “inputs of statement c = f(b);” would be able to remove d = 3;, which cannot influence the function call, even through the pointer access *p. Frama-C's slicer uses the dependencies indicated by the PDG to keep only the statements that are useful for the user-specified slicing criterion. For instance, the command frama-c -slice-wr c t.c -then-on 'Slicing export' -print produces the reduced program below, where the assignment to d has been removed:

If you like to visualize the dependencies of methods calling each other and are using gcc then gcc's option -fdump-rtl-expand might be of interest to you.

For each source file you compile using the option -fdump-rtl-expand gcc will output a *.expand file.

Those files fed to the tool egypt produce graph(s) showing the method's dependencies.

621
What REALLY happens when you don't free after malloc before program termination?
3242
Improve INSERT-per-second performance of SQLite
491
How can one print a size_t variable portably using the printf family?
9
How to generate program dependence graph for C program?
5
Why does the dependence graph of this scanf()-using program by Frama-C look like this?