I've recently added a facebook like button to my site and it's causing a horizontal scrollbar to appear when it's not needed. It doesn't appear in Chrome but is there in Firefox and IE.

Here's a link to the site so you can see: http://www.swiftfurniture.com/

As you can see, on Firefox and IE (possibly other browsers too), there's a horizontal scrollbar when it isn't needed. It's definitely the Facebook like button causing it, because when I comment that out, they disappear.

I've added a fixed width div around the button with overflow: hidden applied, but it seems to ignore that.

I know there's plenty of other questions similar to this, but with using PrestaShop I don't really want to mess around with the core code too much just to get a Facebook Like button working (if at all possible). I was hoping for a solution to keep all the code contained to the "social module" I've created... i.e - just one file rather than messing around with header files etc of PrestaShop.

I've looked into your problem a bit with Firebug and can share some observations that might be helpful.

There is code that is being injected into your <div id="fb-root"></div> and within that is an iframe with an inline style width of 575px.

That is what is causing the scrollbars.

You can add to the "fb-like" attribute data-width="100px"

The mark-up Facebook inserts into your page is liable to change so you want to use a solution that is not dependent on it.

The script tag and fb-like div can remain in their original place.

I had the same issue... there is a width in the code (I think the default is 450). If you change that to something like 150, I think you'll be in good shape. Of course, it depends on the preferences you select on the facebook plugin.

There is a DIV just after

Given URL is not permitted by the application configuration.

so either just remove this DIV or apply

display:none; to get this working perfectly 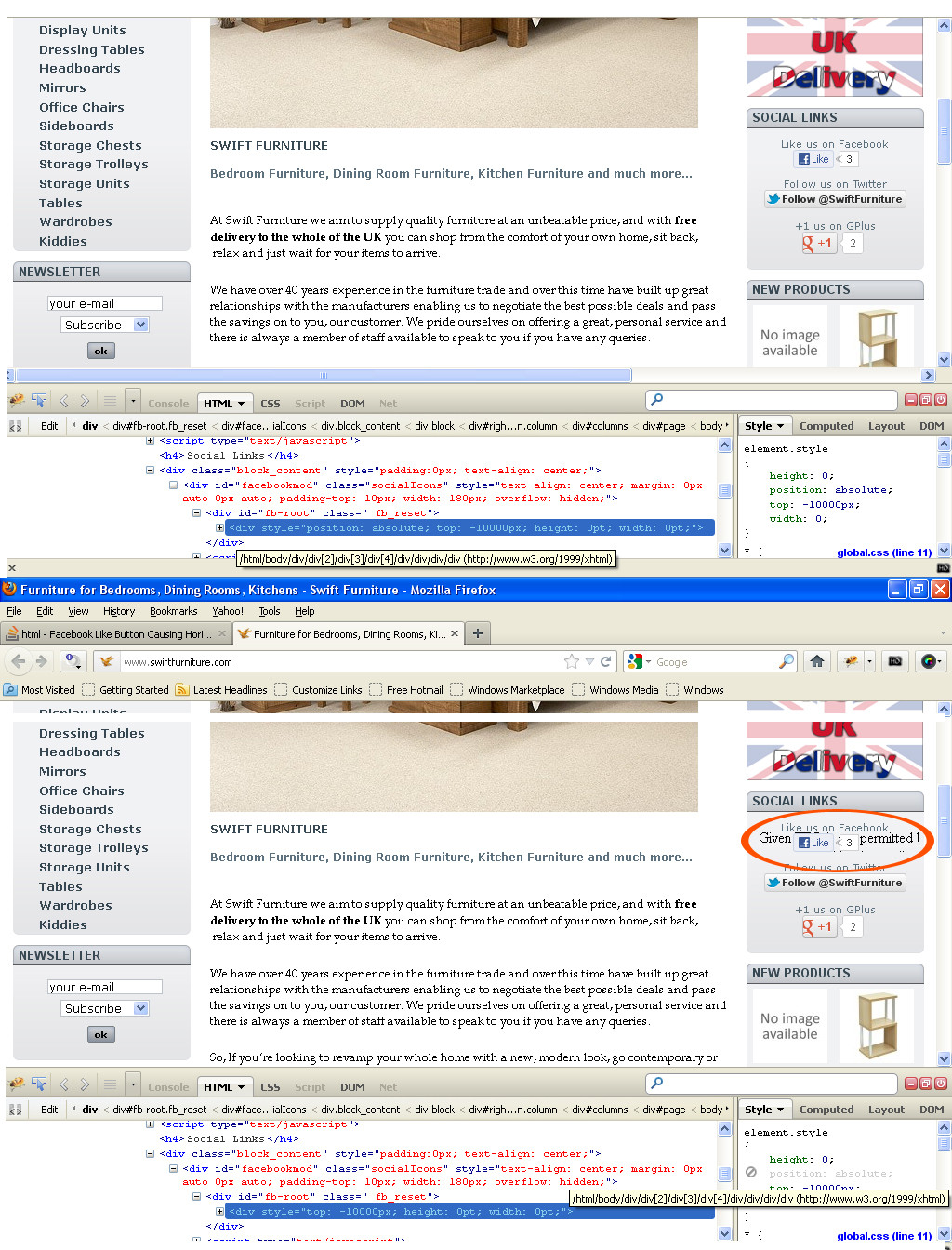 None of the answers here worked for me so I tried it myself. I found a solution:

Put following HTML where you want to show your like button:

Add this to your css

Add attributes data-width and data-height to

This also prevents the vertical scrollbar from appearing if it is not needed.

Not the answer you're looking for? Browse other questions tagged html css facebook facebook-like prestashop or ask your own question.

35
How to remove scrollbars from Facebook iFrame application
0
Why is body tag using scrollbar?

4364
How to horizontally center a <div>?
1648
<button> vs. <input type=“button” />. Which to use?
2735
How can I know which radio button is selected via jQuery?
1957
How to create an HTML button that acts like a link?
107
Facebook Like Button - how to disable Comment pop up?
887
CSS center text (horizontally and vertically) inside a div block
0
Facebook Like button causing error in Firefox
4
Horizontal scrollbar in Firefox caused by #fb-root
183
How can I prevent the scrollbar overlaying content in IE10?
1692
How does Facebook disable the browser's integrated Developer Tools?