What is the predominant programming language used for the F35 Lightning II aircraft?

I understand ADA was used for the F22. What is the principal language for the software on the F35?

The F-35 Joint Strike Fighter (Lightning II) software was comprised of the following languages (at least according to the source below): 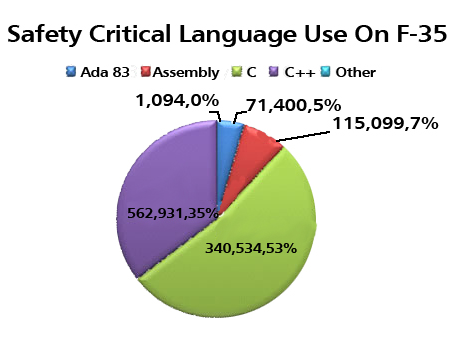 I think Wikipedia's statement is slightly incorrect. All new development for the F-35 was done in C or C++. According to the source above:

In almost every case, the same decision to use C or C++ was made except when a large amount of reuse was possible from previous (F-22) developments.

Unlike previous aircraft, such as the F-22, all software for the F-35 is written in C++ for faster code development.

The F-35 has high COTS (commercial off the shelf) hardware content which means it's probably limited in it's use of "esoteric" languages.

Not the answer you're looking for? Browse other questions tagged programming-languages embedded or ask your own question.

249
Language Books/Tutorials for popular languages
1049
What is the difference between statically typed and dynamically typed languages?
973
Strangest language feature
487
What is duck typing?