In batch, how do I create spaces at the beginning of a input prompt string?

Let's say I have a batch file that has "padding" in it, and I want to indent the beginning of the prompt string for the user to type in. If I use spaces, it will not show up when run, it just ignores the spaces. This script for an example:

After the = there is three spaces, and what I expect is that the marker for input is away from the edge of the command box, however these spaces are ignored.

How can I fix this problem? I am using Windows 7 SP1.

As the comments above state, Vista and beyond strip leading spaces in a SET /P prompt.

The way to get around the problem is to define and use a backspace character in the prompt.

Normally the prompt will be at the beginning of a line, so the above works just fine.

But if the prompt is issued from the middle of a line (very unusual), then a leading character should be included prior to the <BS>, since the backspace will erase whatever was before it.

You need to add a dot after the echo The following example will output "Test" with three leading spaces:

Same works for tabulator. The following example will output "Test" with one leading tab:

Highly inspired by in dbenham's answer, I propose a similar but simpler variation based in the fact that the backspace character can be inserted in its raw form (only in batch files, attempting this in the console directly won't work as expected):

The 'BS' character can be inserted by typing Alt + Numpad 008 (8 is backspace's ASCII code, won't work using the alphanumeric keys typically found above the letters), using a good text editor (such as Notepad++, Windows Notepad simply performs the backspace action).

If unable to insert the character, Notepad++ has a useful feature for this: in TextFX menu, choose TextFX Tools followed by Insert Ascii Chart or Character: 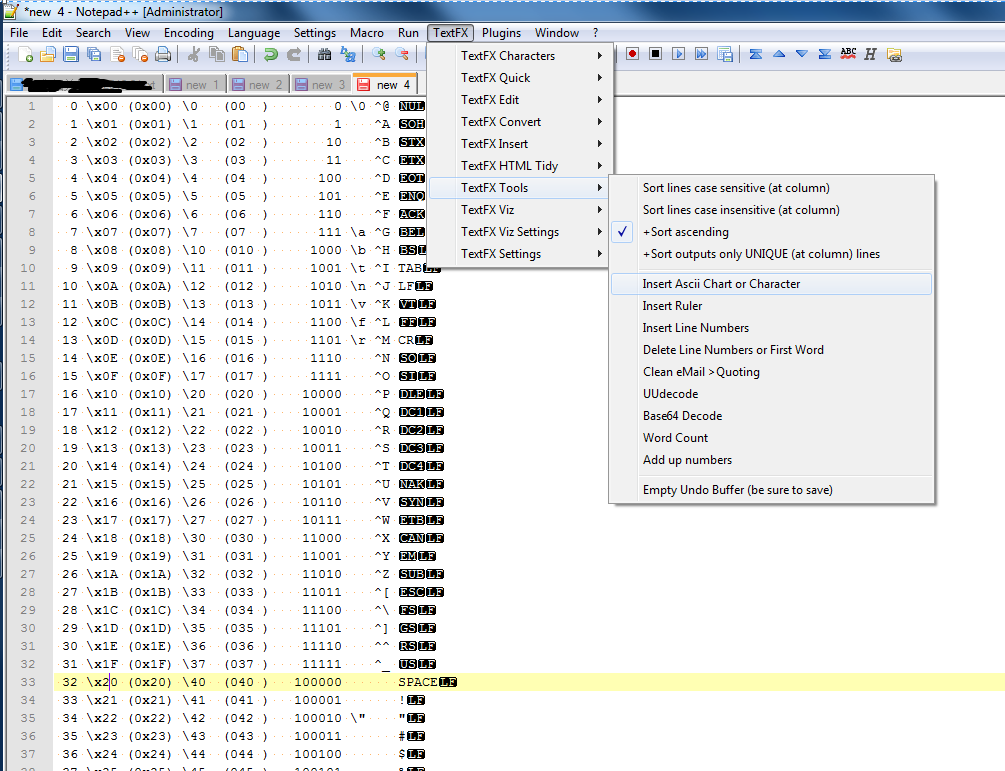 The desired character is the BS (white letters on black background on the screenshot) found in line 9 (ASCII character 8 - as stated above - as it's a zero-indexed table).

If still the result is not the one described, try changing the file encoding to ASCII. Using Notepad++:

This works in every Windows OS from W2K + I've tried, if it suits you. You could just use a : in the string.

dbenhams answer works good when you only want to display the text, but not if you create a file, as it inputs also the backspaces.

But for files(and for displaying) you can use copy /a to remove a CR/LF with the help of a SUB(EOF) character.
The trick is to append the SUB character directly after the text, so it's just before the CR/LF of the ECHO output.
And then using the /a switch of the copy command will only copy the content to the SUB character, so the SUB and also the CR/LF are removed

Not the answer you're looking for? Browse other questions tagged batch-file cmd or ask your own question.

1
How can I preserve entered indent spaces in batch on user prompt?

1233
How can I pass arguments to a batch file?
686
How can I echo a newline in a batch file?
256
How to create empty text file from a batch file?
556
How to prevent auto-closing of console after the execution of batch file
436
In Windows cmd, how do I prompt for user input and use the result in another command?
492
Create folder with batch but only if it doesn't already exist
555
What is the current directory in a batch file?
961
How to “comment-out” (add comment) in a batch/cmd?
0
Create Log of User Input from Batch code