How to fix Error: listen EADDRINUSE while using NodeJS?

If I run a server with the port 80, and I try to use XMLHttpRequest I am getting this error: Error: listen EADDRINUSE

Why is it problem for NodeJS, if I want to do a request, while I run a server on the port 80? For the webbrowsers it is not a problem: I can surf on the internet, while the server is running.

What really helped for me was:

But this will kill a system process.

you can check if it worked.

EADDRINUSE means that the port number which listen() tries to bind the server to is already in use.

So, in your case, there must be running a server on port 80 already.

If you have another webserver running on this port you have to put node.js behind that server and proxy it through it.

You should check for the listening event like this, to see if the server is really listening:

The aforementioned killall -9 node, suggested by Patrick works as expected and solves the problem but you may want to read the edit part of this very answer about why kill -9 may not be the best way to do it.

On top of that you might want to target a single process rather than blindly killing all active processes.

In that case, first get the process ID (PID) of the process running on that port (say 8888):

Then just do (ps - actually do not. Please keep reading below):

You can read a bit more about this here.

EDIT: I was reading on a fairly related topic today and stumbled upon this interesting thread on why should i not kill -9 a process.

Generally, you should use kill -15 before kill -9 to give the target process a chance to clean up after itself. (Processes can't catch or ignore SIGKILL, but they can and often do catch SIGTERM.) If you don't give the process a chance to finish what it's doing and clean up, it may leave corrupted files (or other state) around that it won't be able to understand once restarted.

So, as stated you should better kill the above process with:

EDIT 2: As noted in a comment around here many times this error is a consequence of not exiting a process gracefully. That means, a lot of people exit a node command (or any other) using CTRL+Z. The correct way of stopping a running process is issuing the CTRL+C command which performs a clean exit.

Exiting a process the right way will free up that port while shutting down. This will allow you to restart the process without going through the trouble of killing it yourself before being able to re-run it again. 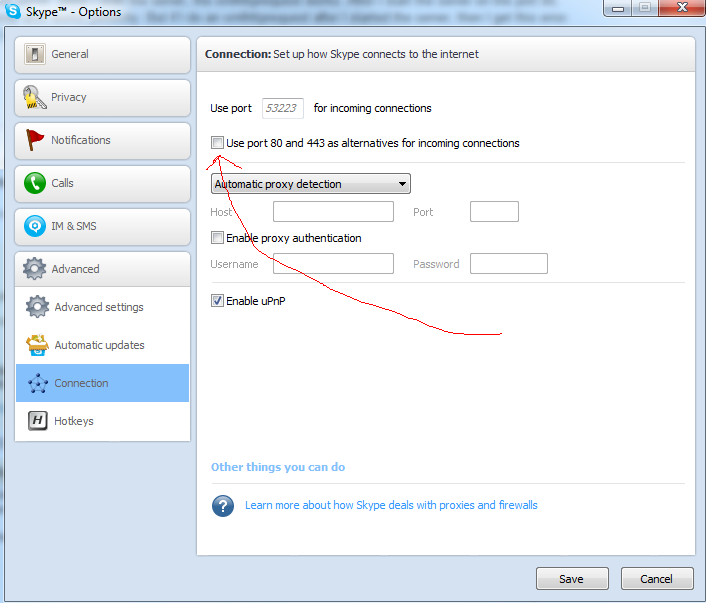 P.S. After making that change, don't forget to restart Skype!

You should try killing the process that is listening on port 80.

Killall will kill all the node apps running. You might not want to do that. With this command you can kill only the one app that is listening on a known port.

If using unix try this command:

Error reason: You are trying to use the busy port number

You can try netstat

For OSX El Capitan and newer (or if your netstat doesn't support -p), use lsof

if this does not resolve your problem, Mac users can refer to complete discussion about this issue Find (and kill) process locking port 3000 on Mac

Under a controller env, you could use:

pkill node before running your script should do the job.

Bear in mind this command will kill all the node processes, which might be right if you have i.e a container running only one instance, our you have such env where you can guarantee that.

In any other scenario, I recommend using a command to kill a certain process id or name you found by looking for it programmatically. like if your process is called, node-server-1 you could do pkill node-server-1.

Another thing that can give this error, is two HTTP servers in the same node code. I was updating some Express 2 to Express 3 code, and had this...

And, it triggered this error.

Your application is already running on that port 8080 . Use this code to kill the port and run your code again

This works for me (I'm using mac). Run this command

This's going to display a list of ports that your syetem is using. Find the PID that your node is running

EADDRINUSE means that the port(which we try to listen in node application) is already being used. In order to overcome, we need to identify which process is running with that port.

For example if we are trying to listen our node application in 3000 port. We need to check whether that port is already is being used by any other process.

That the above command gives below result.

Note: This solution for linux users.

Try both commands and it will stop all node process.

There is a way to terminate the process using Task Manager:

Note that this solution is for Windows only 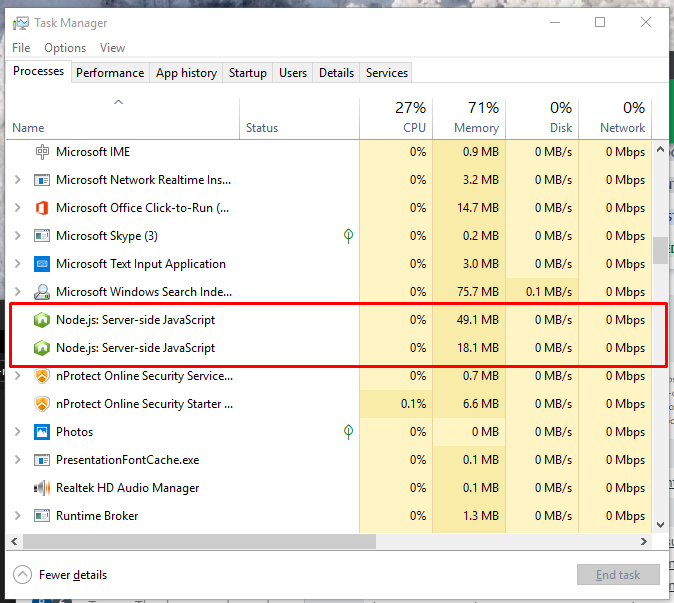 In below command replace your portNumber

This error comes when you have any process running on a port on which you want to run your application.

how to get which process running on that port=> command: sudo netstat -ap | grep :3000

output : you will get the process information which is using that port

EADDRINUSE means port of your nodejs app is already in use.

It turned out I had app.listen(8000) written twice in my script.

My assumption is that the interference was happening only in a short time when trying to run the script, so looking for processes listening to the port before and after error didn't show any.

I have seen this error before (in node) with http.client, and as I recall, the problem had to do with not initializing the httpClient or setting bad options in the httpClient creation and/or in the url request.

Or if you want to assign the same port to the app. Then kill the application that is running at your desired port.

For a node application what you can try is, find the process id for the node app by :

After getting the process id, do

If Jenkin is installed and running on your Mac;

again. that works for me, some time just need to wait for a few second till it work again.

But this works only on a developer machine instead of a server console..

On Debian i found out to run on port 80 you need to issue the command as root i.e

I hope it helps

What does not work:

What shows information but still not does work:

Git Bash or Powershell on Windows

Notice the PID ( far right )
I could not get killall to work... so

Now after that not so fun exercise on windows, I realized I can use task manager and find the Node engine and just end it.

FYI , I was using Visual Studio Code to run Node on port 3500, and I use Git Bash shell inside VS code. I had exited gracefully with Ctrl + C , but sometimes this does not kill it. I don't want to change my port or reboot so this worked. Hopefully it helps others. Otherwise it is documentation for myself.

For windows users execute the following command in PowerShell window to kill all the node processes.

The error EADDRINUSE (Address already in use) reports that there is already another process on the local system occupying that address / port.

There is a npm package called find-process which helps finding (and closing) the occupying process.

Here is a little demo code:

I had the same issue recently.

In my case, I had accidentally run express on 2 terminals, so exiting the terminal using 'Ctrl + C' fixed things for me. (Run server from only one terminal)

Hope it helps others.

Seems there is another Node ng serve process running. Check it by typing this in your console (Linux/Mac):

and quit it with:

to serve your project on a free port of you choice.

2402
How do I chop/slice/trim off last character in string using Javascript?
2681
How do I refresh a page using JavaScript?
2003
How can I update NodeJS and NPM to their latest versions?
2
Why getElementsByClassName doesn't work on xhr reponseXML
1442
How to fix npm throwing error without sudo
3100
Why does my JavaScript code receive a "No 'Access-Control-Allow-Origin' header is present on the requested resource" error, while Postman does not?
2
EADDRINUSE error for opening websocket on different path but same port in nodejs
0
How to fix Error: listen EADDRINUSE while using nodejs isn't working, what else can I do?