How do I fix the error 'Named Pipes Provider, error 40 - Could not open a connection to' SQL Server'?

I can't seem to connect to my database from a site. I get this error:

Named Pipes Provider, error: 40 - Could not open a connection to SQL Server

I tried using the local IP address to connect as well as a public one. I've tried:

What else can I do here?

Solving this problem is very easy:

Screenshot of the steps:

And the simplest solution - check if your slash is back...

I spent about an hour trying to figure out what's wrong with SERVER/INSTANCENAME when everything is configured correctly, named pipes, user access rights... and suddenly it struck me, it's not a slash, it's a backslash (\).

The horror, the shame...

It's a three step process really after installing SQL Server: 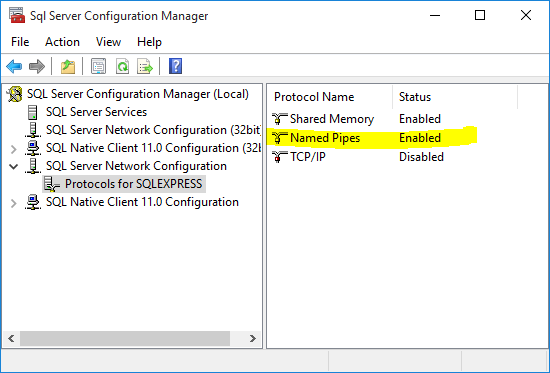 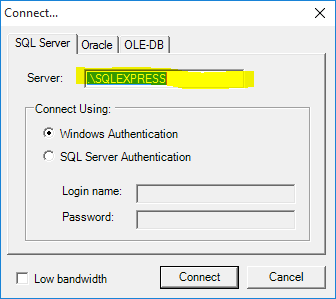 There you have it.

I had just installed SQL SERVER 2012 developer. When I was creating my first SSIS package, I received this pipes error when I was trying to create a data connection task in SQL Server 2012 Data Tools in the Connection Manager box. I resolved with the help of the post above.

A thread on MSDN Social, Re: Named Pipes Provider, error: 40 - Could not open a connection to SQL Server, has a pretty decent list of possible issues that are related to your error. You may want to see if any of them could be what you're experiencing.

Use SERVER\\ INSTANCE NAME .Using double backslash in my project solved my problem.

Did have the same problem. Spent like 6 hours when had to migrate some servers. Tried all suggestions available on this topic and others.

Solution was as simple as server restart!

use (local)\InstanceName that's it. it worked for me.

TL;DR; Your SQL Server instance is using dynamic ports which is not working. Force SQL Server to use static port # 1433.

Complete Details: First of all this problem is more likely if you've a mix of default and named instance or named instances only(which was my case).

Key concept: Each instance of Microsoft SQL Server installed on a computer uses a different port to listen for incoming connection requests. Default instance of SQL Server uses port # 1433. As you install named instances then they will start using dynamic ports which is decided at the time of start-up of Windows service corresponding to named SQL Server instance.

My code was failing (with error code 40) to connect to the only named SQL Server instance that I had on my VM. You can try below possible solutions:

Solution # 1: Client code trying to connect to SQL Server instance takes help from SQL Server browser service to figure out port number at which your named instance is listening for incoming connections. Make sure SQL browser service is running on your computer.

Solution # 2: Check the port # (in yellow color) your named SQL Server instance is using from SQL Server configuration manager as shown in the snapshot below: 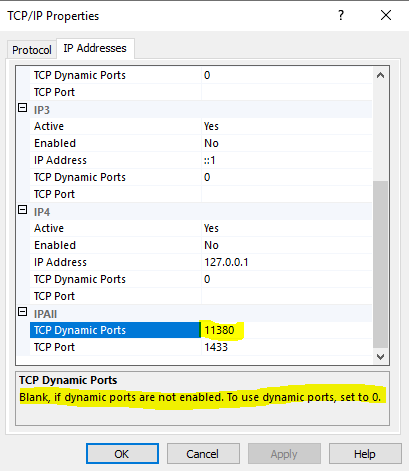 Use that port number explicitly in your connection string or with sqlcmd shown below: 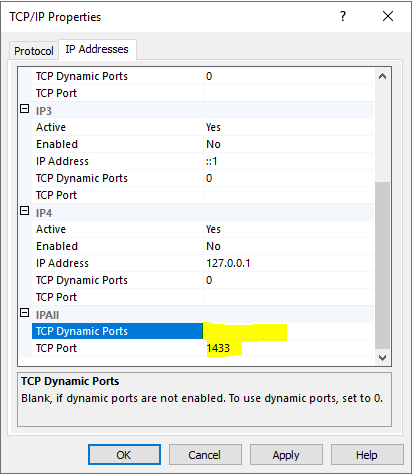 Change the port number in your connection string as shown below:

Interestingly enough after resolving the error when I went back to dynamic port setting to reproduce the same error then it didn't happen. Not sure why.

How to configure SQL Server Port on multiple instances?

When is a Dynamic Port “dynamic”?

When to use a TCP dynamic port and when TCP Port?

I got leads to solution of my problem from this blog.

A network-related or instance-specific error occurred while establishing a connection to SQL Server. The server was not found or was not accessible. Verify that the instance name is correct and

I checked and verified all the below

-Named pipes/TCP is enabled. -Remote connections are allowed. -Windows Firewall is off -Created an exception for portin Windows Firewall( this was not necessary in my case as the server is in same subnet network). -Enabled everything in SQL Server Configuration Manager.

then i chnaged back the port number to default 1433 and restarted the sql server service, and the issue got resolved and i am able to connect the sql server from my local management studio.

I had the same problem. I use the MSSQL Server Management Studio 2017 and solved this problem using these steps: 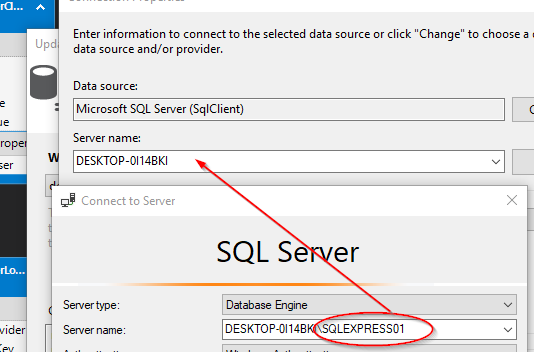 In my case, I opened SQL Server Management Studio and searched for SQLEXPRESS in my Database engine. It had two instances and I selected the correct one. 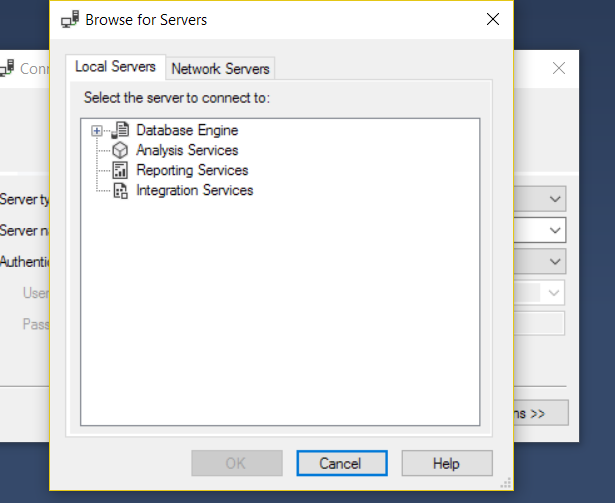 If you are working with Asp.net core and using appsettings.json than write server as localhost and after write sql instance name for enabled named pipe like this

After following all the steps mentioned here, if it still does not connect, try adding the DNS with the IP address in the hosts file in the etc folder. Adding an IP address instead of DNS name in the connection string should be a temporary solution to check if the connection actually works.

I tried using the local IP address to connect as well as a public one. I've tried:

Yes, the site can communicate with the server Named pipes/TCP is enabled. Remote connections are allowed. Windows Firewall is off Created an exception for port 1433 in Windows Firewall. Enabled everything in SQL Server Configuration Manager.

I hope this helps the next guy - I've sacrificed dinner, midnight snack and NBA highlights time solving this (shame)

Enable TCP/Ip , Piped Protocol by going to Computer Management ->SQL and Services, ensure the Service is On. Enbale the port on the Firewall. Try to login through Command Prompt -> as Admin; last the User Name should be (local)\SQLEXPRESS. Hope this helps.

I had the same problem and solved the problem by disabling my firewall(ESET).

The first step to solve this problem should be to try pinging your own computer from another computer. If you have firewall on, you may not be able to ping yourself. I tried pinging my own pc, then ping was failed(didnt get response from the server)

I was trying to add a new connection in VS2015. None of the suggestions here worked. Suspecting some sort of a bug in the wizard, especially since SSMS was able to connect just fine, I decided to try and trick it. It worked!

I have one more solution, I think. I recently had changed my computer name so, after I couldn't connect still after trying all above methods. I changed the Server name.. Server name => (browse for more) => under database engine, a new server was found same as computers new name. This worked, and life is good again.

I had this issue but none of the suggestions above fixed it.

I was seeing this issue when I deployed my website to IIS. The fix was to go into advanced settings against the default app pool and change the identity property from the default to Administrator.

For me it was a Firewall issue.

The second time I got this issue is when I came back to the firewall, the paths were not correct and I needed to update form 12 to 13! Simply clicking on browse in the Programs and Services tab helped to realise this.

EXEC xp_readerrorlog 0,1,"could not register the Service Principal Name",Null

For me, it returned the error reason

I tried pretty much everything on this page but I had some underlying issues which were actually what needed to be resolved. I was unable to do certain things like open SQL Server Configuration Manager, which ended up being corrupt/missing WMI provider files.

There are lots of tedious ways to resolve this issues according to what I've read, but the tool from tweaking.com was able to remove and replace/repair my WMI (Windows Management Instrumentation) Provider files.

I used to do computer repair and overall the tweaking.com tool really impressed me, and it was suggested from one of the WMI error forum pages I went to.

After I fixed this issue I was able to connect to my SQL db, both locally and remotely.

open port number 1433 on your server for sql remote connection

If you tried restarting the MSSQLSERVER service, and it did not work, this might be a solution:

Not the answer you're looking for? Browse other questions tagged sql-server sql-server-2005 database-connectivity or ask your own question.

2036
How to return only the Date from a SQL Server DateTime datatype
2051
How to check if a column exists in a SQL Server table
2227
How to concatenate text from multiple rows into a single text string in SQL Server
1495
How can I do an UPDATE statement with JOIN in SQL Server?
4067
How do I UPDATE from a SELECT in SQL Server?
1
provider: Named Pipes Provider, error: 40 - Could not open a connection to SQL Server
458
Cannot Connect to Server - A network-related or instance-specific error
0
error 40 Named Pipes in clients computer