What is SAPI and when would you use it?

I've been learning about error handling in PHP recently and came across the error_log() function.

In the PHP manual, it talks about all the error log types and I understand all of them except for type 3 which states that the error message is sent directly to the SAPI logging handler. My question is what exactly is SAPI and when would you want to use it?

SAPI stands for "Server API" (and API stands for "Application Programming Interface"). It is the mechanism that controls the interaction between the "outside world" and the PHP/Zend engine. So, you would always want to use it. In fact, you cannot avoid using it without a lot of effort since even CLI is considered a SAPI.

For web developer, you can think of API such as REST, SOAP. You call a link you get a data from server. It allows you interact with the web server.

SAPI is different with REST or SOAP, SAPI is API (contract) used for server.

For example: Common Gateway Interface is an SAPI. If a web server support CGI and another executable program implement it so web server can inteface and generate web pages dynamically.

Look the picture below: 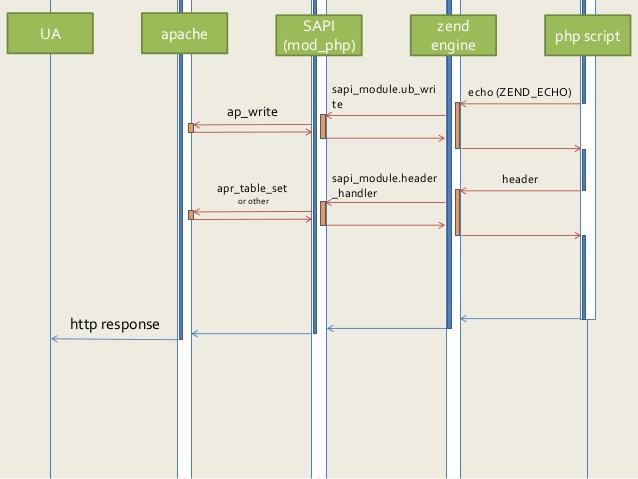 mod_php implement an interface which apache and php can understand each other.

So what is SAPI exactly: It is a contract between Server (any kind of server) and the program. Just follow the contract and they don't need to know other side details.

In other words, SAPI is actually an application programming interface (API) provided by the web server to help other developers in extending the web server capabilities.

As an example, PHP has a direct module interface called SAPI for different web servers; in case of PHP 5 and Apache 2.0 on Windows, it is provided in form of a DLL file called php5apache2.dll, which is a module that, among other functions, provides an interface between PHP and the web server, implemented in a form that the server understands. This form is what is known as a SAPI.

There are different kinds of SAPIs for various web server extensions. For example, another two SAPIs for the PHP language are Common Gateway Interface (CGI) and command-line interface (CLI).

Arguable if API runs on the server it may be called SAPI.

Today, from the perspective of speed and efficiency FPM would be the most evolved SAPI. Apache or Nginx will perform better comparing the other mentioned SAPIs.

In general, PHP applications very rarely need to know their SAPI. This usually matters if the script is to be called from a cron, but not from a web browser, in which case it checks that it's SAPI equals "cli"

14
I need to debug PHP. What is my best choice?
15
PHP's error_log() vs syslog()
2
Why is PHP CLI considered as a kind of SAPI?
0
october cms host migration issue PHP Fatal error
0
How to access to apache log?
0
A command line works in cmd, but when i try to use it in php (exec) does not work
0
Logging Paradigms in PHP

2197
When should I use 'self' over '$this'?
108
How to do error logging in CodeIgniter (PHP)
2285
How do you parse and process HTML/XML in PHP?
5006
Reference Guide: What does this symbol mean in PHP? (PHP Syntax)
1121
What is the difference between public, private, and protected?
177
PHP-FPM doesn't write to error log
2250
How does PHP 'foreach' actually work?
1167
What are Long-Polling, Websockets, Server-Sent Events (SSE) and Comet?
1258
Reference - What does this error mean in PHP?