This question does not appear to be about a specific programming problem, a software algorithm, or software tools primarily used by programmers. If you believe the question would be on-topic on another Stack Exchange site, you can leave a comment to explain where the question may be able to be answered.

I understand it's off topic, I couldn't find anywhere online and I was thinking maybe programming gurus in the community might know this.
I usually use

to kill the job. I always wondered the origin of 9. I looked it up online, and it says

"9 Means KILL signal that is not catchable or ignorable. In other words it would signal process (some running application) to quit immediately" (source: http://wiki.answers.com/Q/What_does_kill_-9_do_in_unix_in_its_entirety)

But, why 9? and what about the other numbers? is there any historical significance or because of the architecture of Unix?

See the wikipedia article on Unix signals for the list of other signals. SIGKILL just happened to get the number 9.

You can as well use the mnemonics, as the numbers:

There were 8 other signals they came up with first.

I think a better answer here is simply this:

As for the "significance" of 9... I would say there is probably none. According to The Linux Programming Interface(p 388):

Each signal is defined as a unique (small) integer, starting sequentially from 1. These integers are defined in with symbolic names of the form SIGxxxx . Since the actual numbers used for each signal vary across implementations, it is these symbolic names that are always used in programs.

First you need to know what are Signals in Unix-like systems (It'll take just few minutes).

Signals, are software interrupts sent to a (running) program to indicate that an important event has occurred.

The events can vary from user requests to illegal memory access errors. Some signals, such as the interrupt signal, indicate that a user has asked the program to do something that is not in the usual flow of control.

There are several types of Signals we can use - to get a full list of all the available/possible Signals use "$ kill -l" command: 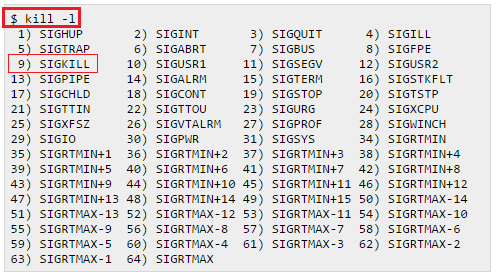 In the above output it's clearly visible, that each Signal has a 'signal number' (e.g. 1, 2, 3) and a 'signal name' (e.g. SIGUP, SIGINT, SIGQUIT) associated with it. For a detailed look up what each and every Signal does, visit this link.

Finally, coming to the question "Why number 9 in kill -9 command":

There are several methods of delivering signals to a program or script. One of commonly used method for sending signal is to use the kill command - the basic syntax is:

Where signal is either the number or name of the signal, followed by the process Id (pid) to which the signal will be sent.

For example - -SIGKILL (or -9), signal kills the process immediately.

Verdict: One has an open choice to whether use the 'signal name' or 'signal number' with the kill command.

It's a reference to "Revoulution 9" by the Beatles. A collection of strung together sound clips and found noises, this recording features John Lennon repeating over and over "Number 9, Number 9..." Further, this song drew further attention in 1969 when it was discovered that when played backwards, John seemed to be saying "Turn me on, dead man..."

Therefore the ninth signal was destined to be the deadliest of the kill signals.

There’s a very long list of Unix signals, which you can view on Wikipedia. Somewhat confusingly, you can actually use kill to send any signal to a process. For instance, kill -SIGSTOP 12345 forces process 12345 to pause its execution, while kill -SIGCONT 12345 tells it to resume. A slightly less cryptic version of kill -9 is kill -SIGKILL.

I don't think there is any significance to number 9. In addition, despite common believe, kill is used not only to kill processes but also send a signal to a process. If you are really curious you can read here and here.

why kill -9 : the number 9 in the list of signals has been chosen to be SIGKILL in reference to "kill the 9 lives of a cat".

SIGKILL use to kill the process. SIGKILL can not be ignored or handled. In Linux, Ways to give SIGKILL.

Type the kill -l command on your shell

SIGKILL is sure kill signal, It can not be dis-positioned, ignore or handle. It always work with its default behaviour, which is to kill the process.

The -9 is the signal_number, and specifies that the kill message sent should be of the KILL (non-catchable, non-ignorable) type.

Which is same as below.

Without specifying a signal_number the default is -15, which is TERM (software termination signal). Typing kill <pid> is the same as kill -15 <pid>.

Both are same as kill -sigkill processID, kill -9 processID. Its basically for forced termination of the process.

there are some process which cannot be kill like this "kill %1" . if we have to terminate that process so special command is used to kill that process which is kill -9. eg open vim and stop if by using ctrl+z then see jobs and after apply kill process than this process will not terminated so here we use kill -9 command for terminating.

642
What does the number in parentheses shown after Unix command names in manpages mean?
505
Equivalent of *Nix 'which' command in PowerShell?
5901
How do I execute a program or call a system command?
943
How can I convert a Unix timestamp to DateTime and vice versa?
949
Is there any way to kill a Thread?
1920
Why should text files end with a newline?
821
How to kill a process on a port on ubuntu
1289
How to kill a process running on particular port in Linux?