I've been trying to use wscons and wsdisplay on NetBSD 5.1.2 (using the VESA framebuffer implementation) recently and I've encountered a bit of a problem:

I can set color maps successfully and they look correct but getting color maps seems to return incorrect data, such that when I try to restore the original color map once the program has finished, all the colors are incorrect: 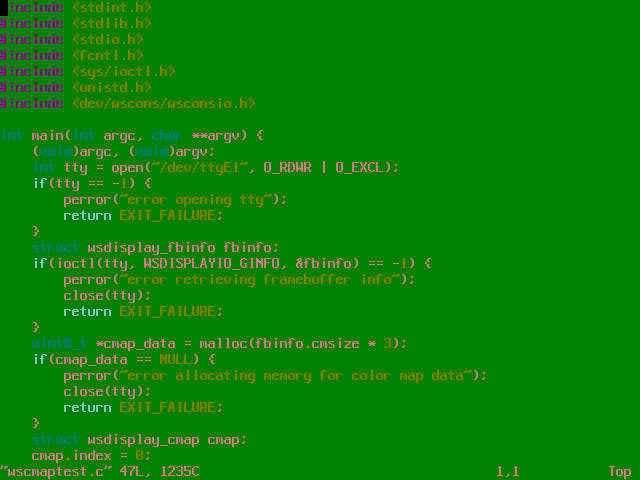 Here's a reduced program causing the problem (note that it must be run either as root or as the user logged in on the second virtual terminal (/dev/ttyE1)):

What am I doing wrong and how can I make it retrieve and restore color maps correctly?

I looked into the problem more and it appears that some kernel memory is either uninitialized or getting corrupted. Specifically, sc_cmap_red, sc_cmap_green, and sc_cmap_blue of struct vesafb_softc (in vesafbvar.h on lines 89 to 91) contain incorrect data. This is somewhat surprising, as lines 719 to 722 of vesafb.c initialize it:

It contains incorrect data even if I move that out of the if statement it's in, so it might be getting corrupted rather than being uninitialized.

The driver is able to get and set color maps correctly, however; it just cannot seem to get the initial one in struct vesafb_softc right.

A simple solution would be to make a program re-set the default color map. As the above snippet indicated, it was supposed to get its initial colors from rasops_cmap, which happens to be defined on lines 55 to 122 in rasops.c:

With those colors, you can make a program that sets that as the current color map. I had to make a few changes so the cursor didn't disappear, but it mostly worked.

As I was looking around for more information, I had found this blog post. When I recompiled the kernel with genfb(4) rather than vesafb(4), the kernel hung at boot. It turns out this was because the bootloader I was using was not new enough to pass the required parameters to the kernel.

I happened to look at the NetBSD 6.0 changelog and noticed this entry:

I downloaded NetBSD 6.0_BETA and booted it from the boot prompt like this:

In short, using a newer version of NetBSD and ditching vesafb(4) solves the problem.

Not the answer you're looking for? Browse other questions tagged c color-palette netbsd or ask your own question.

272
How to correctly use the extern keyword in C
1
V4L problem with VIDIOCGCAP ioctl call
593
Why does printf not flush after the call unless a newline is in the format string?
5
Consistently using types across source files
522
Why does sizeof(x++) not increment x?
3
Why am I not able to build Vim with Visual Studio 2015 RC command line tools?
1
Square root values not being retrieved
0
Reactive Leaflet Map Not Recognizing 2nd Color Palette
0
CS50 Recover - How do I use sprintf? error: use of undeclared identifier 'filename'; did you mean 'rename'?