If a div is an Element Object then what about div Node object?

What is a Node Object?

As per David Flanagan's book 'The Document object, Its Element Objects and text objects are all Node objects'.

So How come an object can inherit properties/methods of Element object as well as Node object?

If yes, I guess Node Class and Element Class are related in prototypal tree of inheritance.

A node is the generic name for any type of object in the DOM hierarchy. A node could be one of the built-in DOM elements such as document or document.body, it could be an HTML tag specified in the HTML such as <input> or <p> or it could be a text node that is created by the system to hold a block of text inside another element. So, in a nutshell, a node is any DOM object.

An element is one specific type of node as there are many other types of nodes (text nodes, comment nodes, document nodes, etc...).

So, a nodeList is simply an array-like list of nodes.

An element is a specific type of node, one that can be directly specified in the HTML with an HTML tag and can have properties like an id or a class. can have children, etc... There are other types of nodes such as comment nodes, text nodes, etc... with different characteristics. Each node has a property .nodeType which reports what type of node it is. You can see the various types of nodes here (diagram from MDN): 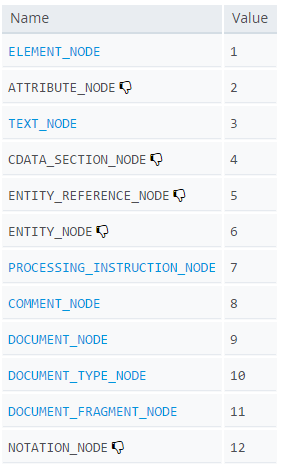 You can see an ELEMENT_NODE is one particular type of node where the nodeType property has a value of 1.

So document.getElementById("test") can only return one node and it's guaranteed to be an element (a specific type of node). Because of that it just returns the element rather than a list.

Since document.getElementsByClassName("para") can return more than one object, the designers chose to return a nodeList because that's the data type they created for a list of more than one node. Since these can only be elements (only elements typically have a class name), it's technically a nodeList that only has nodes of type element in it and the designers could have made a differently named collection that was an elementList, but they chose to use just one type of collection whether it had only elements in it or not.

EDIT: HTML5 defines an HTMLCollection which is a list of HTML Elements (not any node, only Elements). A number of properties or methods in HTML5 now return an HTMLCollection. While it is very similar in interface to a nodeList, a distinction is now made in that it only contains Elements, not any type of node.

The distinction between a nodeList and an HTMLCollection has little impact on how you use one (as far as I can tell), but the designers of HTML5 have now made that distinction.

For example, the element.children property returns a live HTMLCollection.

Node is for implementing a tree structure, so its methods are for firstChild, lastChild, childNodes, etc. It is more of a class for a generic tree structure.

And then, some Node objects are also Element objects. Element inherits from Node. Element objects actually represents the objects as specified in the HTML file by the tags such as <div id="content"></div>. The Element class define properties and methods such as attributes, id, innerHTML, clientWidth, blur(), and focus().

Some Node objects are text nodes and they are not Element objects. Each Node object has a nodeType property that indicates what type of node it is, for HTML documents:

We can see some examples in the console:

The last line above shows that Element inherits from Node. (that line won't work in IE due to __proto__. Will need to use Chrome, Firefox, or Safari).

Best source of information for all of your DOM woes

The Node object represents a single node in the document tree. A node can be an element node, an attribute node, a text node, or any other of the node types explained in the Node Types chapter.

The Element object represents an element in an XML document. Elements may contain attributes, other elements, or text. If an element contains text, the text is represented in a text-node.

Node is used to represent tags in general. Divided to 3 types:

Text Node: is node which between the opening and closing its have contian text content. Exp: <p>Hello</p>

Each node may be types simultaneously, not necessarily only of a single type.

Element is simply a element node.

A DOM document is a hierarchical collection of nodes. Each node can have a parent and/or children.

Understanding the difference between a DOM node and an element is easy if you understand what a node is.

Nodes have types, the element type being one of them. The element is represented by a tag in the HTML document.

Not the answer you're looking for? Browse other questions tagged javascript html dom or ask your own question.