Git is an open-source distributed version control system (DVCS). Use this tag for questions related to Git usage and workflows. DO NOT USE the [github] tag for Git-related issues simply because a repository happens to be hosted on GitHub. Also, do not use this tag for general programming questions that happen to involve a Git repository.

Git is an open-source distributed version control system (dvcs) with an emphasis on speed. git was initially designed and developed by Linus Torvalds for linux kernel development, now it is maintained by Junio Hamano.

Every Git working directory contains a full-fledged repository with complete history and full revision tracking capabilities, not dependent on network access or a central server. 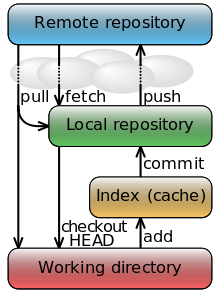 Working with the code

The Stack Overflow git chat is useful for coordinating work within this tag, and perhaps occasionally for getting quick help (though no guarantees can be made; attendance is spotty).

How to compare two files in the same commit that is in the remote branch without switching the current local branch?

Merging a rebased branch into the un-rebased version of it