Ruby is a multi-platform open-source, dynamic object-oriented interpreted language. The [ruby] tag is for questions related to the Ruby language, including its syntax and its libraries. Ruby on Rails questions should be tagged with [ruby-on-rails].

The ruby tag is for questions related to the Ruby language, including its syntax and its libraries. Questions specifically about the Ruby on Rails framework should be tagged with ruby-on-rails in addition to ruby. Do not use this to tag ruby used in the Japanese language.

Ruby is an open-source dynamic object-oriented interpreted language that combines concepts from Perl, Smalltalk, and Lisp. It supports multiple programming paradigms including functional, object-oriented, and imperative. It also has a dynamic type system and automatic memory management; it is, therefore, similar in varying respects to Smalltalk, Python, Perl, Lisp, Dylan, and CLU. Ruby's primary purpose is to "help every programmer in the world to be productive, and to enjoy programming, and to be happy." Ruby focuses on simplicity and productivity.

Ruby was initially conceived on February 24, 1993, by Yukihiro Matsumoto ('Matz') and version 1.0 was released in 1996. Ruby's mindshare spiked around 2005 due to Ruby on Rails, an MVC (Model, View, Controller) framework for building web applications and usage continues to grow as of 2016 with Ruby continuing to find acceptance in the commercial marketplace. The current stable version is 3.0.0 (2020-12-25). 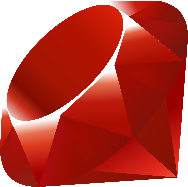