A time zone is a region on Earth that has a uniform, legally mandated standard time. It is often represented by an identifier, such as "America/Los_Angeles". Do not mistake an offset such as -07:00 as a time zone. A time zone is much more than that. Please read the entire tag wiki for details.

A time zone is a region on Earth that has a uniform, legally mandated standard time. As legal definitions of zones can vary wildly and change often, a database or lookup table is often required to properly apply time zone rules.

Almost all time zones on land have legally defined borders which coincide with the borders of the country mandating the time or some subdivision thereof. Of the time zones on land, most have a standard-time offset from Coordinated Universal Time (UTC) by a whole number of hours (UTC−12 to UTC+14), but several are offset by 30 or 45 minutes from a nearby hourly offset.

In addition to land time zones, there are 25 nautical time zones, all separated by lines of longitude. Most (UTC−11 to UTC+11) are 15° of longitude wide, which is one hour of Earth's rotation relative to the Sun, but an hourly zone in the central Pacific Ocean is split into two 7.5° wide zones (UTC±12) by the 180th meridian, part of which coincides with the International Date Line. Many land time zones are skewed toward the west relative to the corresponding nautical time zones.

Before 1972, all time zones were specified as an offset from Greenwich Mean Time (GMT), which was the mean solar time at the meridian passing through the Royal Observatory in Greenwich, London, United Kingdom. Since 1972, all official time services have broadcast radio time signals synchronized to UTC, a form of atomic time that includes leap seconds to keep it within 0.9 seconds of this former GMT, now called UT1. Many countries now legally define their standard time relative to UTC, although some still legally refer to GMT, including the United Kingdom itself. UTC, also called Zulu time, is used everywhere on Earth by astronomers and others who need to state the time of an event unambiguously.

Originally, all time on Earth was some local apparent solar time, the time on a sundial, so every city had its own time. When well-regulated mechanical clocks became widespread in the early 19th century, each city began to use some local mean solar time. The first time zone was created in 1847 by railroads on the island of Great Britain using GMT. Sandford Fleming of Canada proposed worldwide hourly time zones in 1879. By about 1900, almost all time on Earth was in the form of standard time zones, only some of which used a hourly offset from GMT. Many applied the time at a local astronomical observatory to an entire country, without any reference to GMT. It took many decades before all time on Earth was in the form of time zones referred to some "standard offset" from GMT/UTC. Nepal was the last country to adopt a standard offset, shifting slightly to UTC+5:45 in 1986. However, many countries have changed their standard offset since then, such as when North Korea shifted from UTC+9 to UTC+8:30 in 2015.

A related concept is Daylight saving time or Summer Time, which is an advance of (usually) one hour, mandated by many countries between spring and autumn.

A time zone can not be represented solely by an offset from UTC. Many time zones have more than one offset due to daylight saving time (aka "summer time") rules. The dates that offsets change are also part of the rules for the time zone, as are any historical offset changes. Many software programs, libraries, and web services disregard this important detail, and erroneously call the standard or current offset the "zone". This can lead to confusion, and misuse of the data. Please use the correct terminology whenever possible.

In general, if an abbreviation is used, it should be for display purposes. An abbreviation should never be parsed, or looked up in a list of values (with the exception of "UTC" or "GMT").

You can obtain a list of these time zones by any of these methods:

This map shows the world map of IANA/Olson time zones, along with fixed offset time zones over the oceans. Note that many countries have multiple time zones. 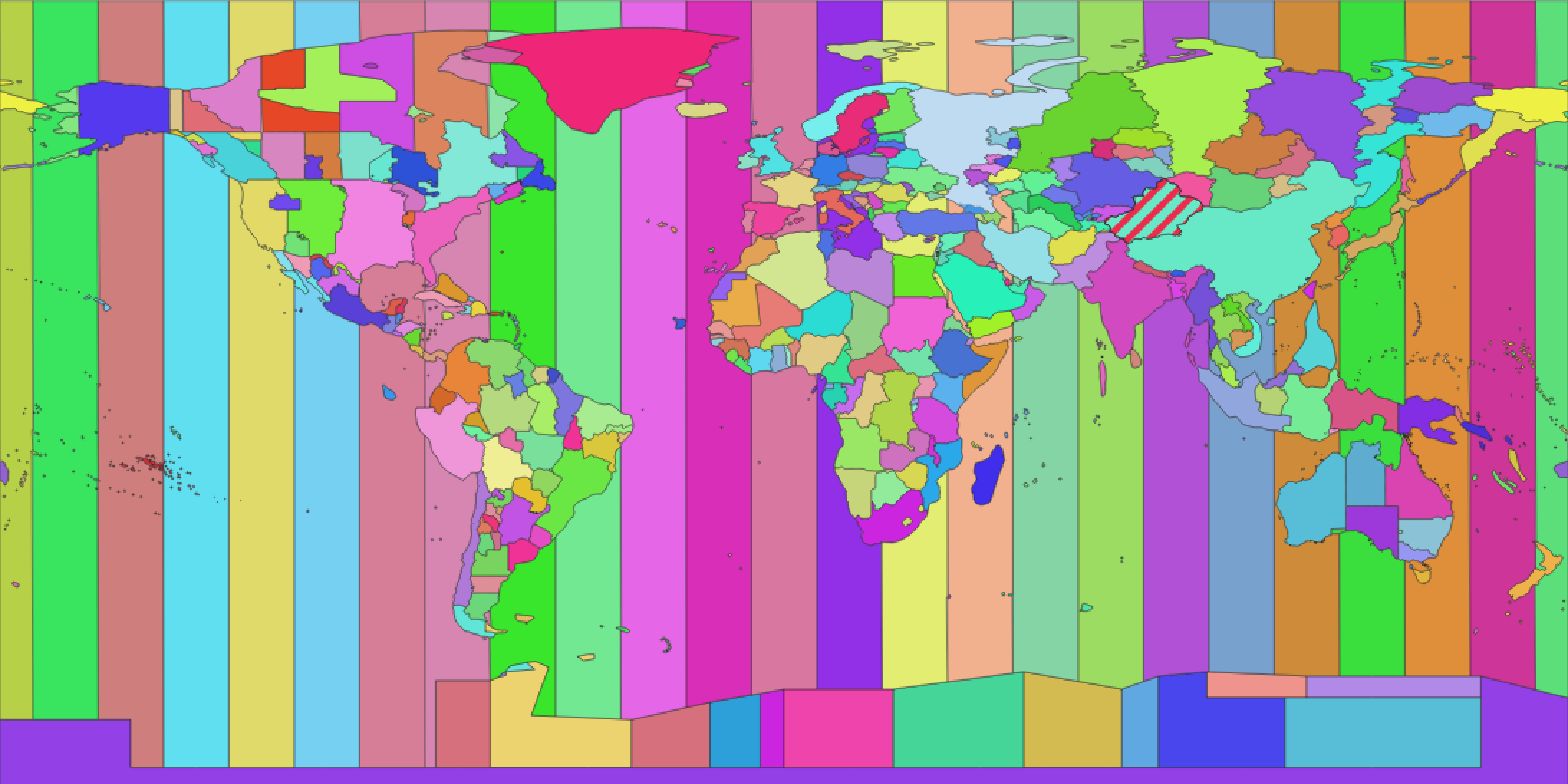 More time zone maps are available at Time_zone in Wikipedia.

Role of the CLDR

Related: How to convert between Microsoft time zones and IANA time zones in .NET.

Prior to acceptance of the time zone databases, the standard way to describe time zones was defined by the POSIX specification, as set in the TZ environment variable.

While this compact format allows for time zone rules to be expressed without a database, it has a few disadvantages:

Fortunately, most environments that accepted a TZ variable, will now allow you to pass an IANA/Olson identifier instead. For example, see the third option for working with time zones in glibc.

IBM has a good article about POSIX vs Olson time zone formats here. (This was written for AIX, but is applicable in many other contexts.)

POSIX style time zones are still useful in some cases, such as on lightweight "IoT" devices where there is not enough storage space for a full IANA time zone implementation. In such cases, a POSIX string for the current year can be generated by a back-end service that the device receives data from. Of course, this should be updated periodically, as the string could change year-over-year, or even within the year. On such library that can project POSIX strings from IANA data is TimeZoneConverter.Posix for .NET. There are other libraries and web services that can generate these values as well.

If you are a Ruby on Rails developer, or if you use an API from an application that was created using Rails (such as Twitter), then you may encounter time zone identifiers in a slightly different format, such as follows:

These identifiers are defined by Rails in the ActiveSupport::TimeZone class. The source code for this class is here. They are based on standard IANA/Olson time zones. Rails describes them as "a meaningful subset of 146 zones", however it does not describe by what criteria it determines a zone to be "meaningful".

While these particular zones should work just fine within a Rails application, you may find it difficult to use them in other contexts. For example, if you need to pass a time zone to a JavaScript library, or via a REST API to some third party, it may be difficult to consume them in Rails format. Rails developers should consider one of the two approaches:

Related: How to convert from Microsoft time zones to Rails time zones.

Can I infer time zone from offset AND a datetime?