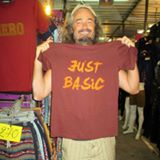 I'm a self taught hobby programmer with diverse and often changing interests.

I learned BASIC on several microcomputers of the '80s and '90s then Z80 machine code on the Sinclair ZX Spectrum without an assembler then C and 68000 assembly on the Commodore Amiga then C++.

Once Doom and Linux appeared I moved to the PC and started with scripting languages. I've moved from Perl to NodeJS, skipping Python and Ruby.

I always find edge cases few other people hit in almost any project I get into.

I worked as a professional C programmer from the mid nineties until the IT crash on Amiga and then PC.

I'm very happy to be coding just for myself again.

All Questions Answers
Votes Newest
112 What are the most common non-BMP Unicode characters in actual use? [closed] Apr 6 '11
97 When should I use jQuery deferred's “then” method and when should I use the “pipe” method? Mar 6 '12
50 How can I process each letter of text using Javascript? Apr 4 '16
45 Can jQuery selectors be used with DOM mutation observers? Sep 26 '12
42 When working with text nodes should I use the “data”, “nodeValue”, “textContent” or “wholeText” field? [duplicate] Sep 5 '12
38 How can I use JSON on the web page from a source with neither CORS nor JSONP? Dec 20 '11
36 How can I find a user’s country using HTML5 geolocation? Aug 2 '12
30 Is node.js a viable alternative to traditional scripting languages like Perl and Python? [closed] Dec 16 '12
28 How to retrieve Wiktionary word content? Dec 3 '10
22 Send list/array as parameter with jQuery getJson Dec 21 '11
View all questions and answers →